The debut of Gake no Fuchi Joshi Pro brought along 100 fans to the Saitama Wrestle Battle Hall. According to Miyako Matsumoto that meant these 100 fans did not go to Korakuen Hall for the other big joshi show running today on Christmas Eve, which pleased her. She went over the previous history of Gake no Fuchi and explained how the promotion came back to life. She was worried with how the show would work out but is very satisfied by the result.

The advertised match between Matsumoto and Jiro “Ikemen” Kuroshio was held under Gake no Fuchi rules. They are mostly the same as pro wrestling rules. However at random times during the match a whistle will be blown and a minigame will take place. Their example of a minigame was “something like the battle between light and darkness that has been around since the beginning of history.” Points are awarded to the wrestlers depending on the result of the minigame. Should the wrestling match end in a 60 minute draw then whoever has the most points will be declared the winner.

Matsumoto was the first to make her entrance. She completely copied Kuroshio’s entrance by using the “HELLO” song, wearing her own Ikemen jacket and stalling for as long as he would. The referee Daisuke Kiso then came out and also did the Ikemen entrance with the same song and his own jacket. The song continued playing for a while until Chikara unexpectedly came out doing the entrance! Finally Kuroshio appeared, confused as to how or why Chikara got here. Chikara explained he was the witness for the match, so he went to sit down at ringside.

The match began with Kuroshio threatening to squash Matsumoto. They locked up, fought around ringside for a little bit then Kuroshio hit Matsumoto with a big Shoulder Block that looked to have knocked her out. The whistle blew and it was time for the first minigame: “Ryogoku Sumo Match Day 1!”

The two squared off for a game of sumo. Kuroshio threw down Matsumoto and received a point for winning. The match returned to pro wrestling rules until the whistle blew again. The next minigame was “Ryogoku Sumo Match Day 2!” Matsumoto improved this time but still could not beat Kuroshio so she was now losing 2-0 in points. A puzzled Kuroshio shouted at his opponent, asking if she knew anything about Sumo?

The whistle blew for the 3rd minigame: “Gake no Fuchi Proxy War!” Out came the Ohuchi Rider to confront Chikara who had suddenly fallen to the Dark Side. Rider attacked Chikara with a bottle opener and a brick but Chikara deflected them with a lightsaber. Chikara used the Force to make Rider choke himself by wrapping a chain around his own neck. Ohuchi Rider was defeated which means Kuroshio won his third point.

The 4th minigame was “Gake No Fuchi Last Gig Confrontation”. A keyboard was placed in the ring and both wrestlers had to play a song. Matsumoto went first and played Kuroshio’s entrance song “HELLO” on a melodica. She thought she had outsmarted her opponent but Ikemen surprised everyone by playing “Bakusho Sengen”, the theme of Shinya Hashimoto on the keyboard! Ikemen won the audience vote and increased his lead to 4-0.

There was no time to recuperate because they went straight to “Ryogoku Sumo Match Final Day!” Kuroshio put Matsumoto in a Manjigatame while Rider and Chikara played sumo. Kuroshio let go of Matsumoto and threw Rider onto the mat. The referee ruled it as a win for Kuroshio. He tried to give Matsumoto a Brainbuster when the whistle blew again.

This time the game was “Gake No Fuchi Flag Race”. Both Matsumoto and Kuroshio had to lie face down near the entrance. After a countdown the first person to get up and attack Kiso wins the point. Matsumoto got into the ring faster than Kuroshio but Kiso avoided her attack and struck her with a Flying Cross Chop. Now Daisuke Kiso had won a point!

There were a few nearfalls and the match looked like it was back to normal. Then there was yet another whistle for a game of “Gake no Fuchi Must Not Laugh Christmas”. A manzai style comedy double act entered the ring wearing bathrobes (the woman was Metropoli-chan V, I didn’t recognise the man). Their act didn’t get either wrestler to laugh. Chikara entered the ring and hit the comedians with a baseball bat, forgetting how the game is supposed to work (you hit the person who laughs). This made Kuroshio laugh so he got hit. Kiso laughed at that so he got hit too. Matsumoto finally won a point! 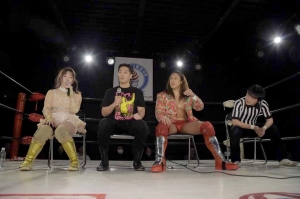 Chairs were then brought into the ring for the next game “Gake no Fuchi Live Morning TV”. Matsumoto, Kuroshio, Chikara and Kiso all sat down together and had a TV style debate about marriage. The game went to a no contest when Chikara lost his temper and attacked the other wrestlers.

Both Matsumoto and Kuroshio could barely recover when the “Gake no Fuchi MC Battle” began. It was a rap battle. Kuroshio won. By this point 30 minutes had passed in the match. Chikara might have attacked them with chops at this point. I don’t know, I’m losing my mind. 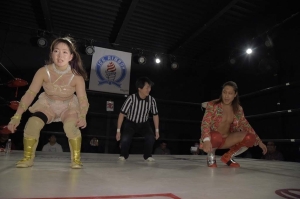 Anyway the next game was the “Gake no Fuchi Squat Confrontation”. The wrestlers and Kiso began to squat. Kiso gave up almost immediately. Matsumoto eventually lost because her knee did not bend properly for the squat to count so now Kuroshio had 7 points.

Believe it or not that turned out to be the last minigame of the match because they went back to wrestling from here on out. Kuroshio missed the Moonsault Press. Matsumoto gave him a Small Package for a nearfall. Kuroshio then revered the Small Package and pinned Matsumoto for the three count.

Kuroshio told Matsumoto he felt connected to her after doing this match. He once did his own self-produced show in Shinjuku FACE so he knows what it is like to do a similar project. Matsumoto thanked him for giving her the match before he leaves Japan. She hopes they can team up together one day. She thinks they can be a super dangerous tag team together on the same level as Heisei Ishingun or the nWo! Kuroshio promised they will tag as many times as possible when he returns to Japan.

But that wasn’t it for the show! Suddenly Sanshiro Takagi came out. He liked the match they just had and likes the idea of them teaming together even more. So they are going to have a tag team match against Takagi straight away! Takagi’s tag partner is somebody who also is going to have a final match of her own soon. It’s Tequila Saya from Ice Ribbon! 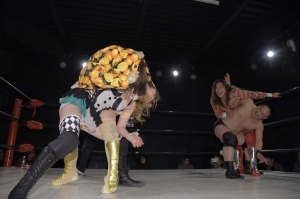 Matsumoto put her Ikemen jacket back on and along with Kuroshio attacked their opponents to start the impromptu match. Takagi & Saya rallied and with the help of Chikara hit a Train Attack on Matsumoto. Kuroshio came to her aid and helped Matsumoto do the Mamma Mia Z. But Takagi caught her and countered with the Spicolli Driver. Saya went for the Grand Maestro de Tequila but Matsumoto countered it with her own clutch for a nearfall. Matsumoto and Saya went back and forth with Cradles until Saya successfully applied the Grand Maestro de Tequila to win.

Takagi thanked Saya for coming over today and told her to enjoy her remaining pro wrestling life before her retirement match on 31st December. He also thanked Kuroshio and said it will be the last time they will wrestle each other for a while. Finally, Takagi congratulated Matsumoto for successfully bringing back Gake no Fuchi. He encouraged her to recreate the brand’s history with her own hands. After all, Matsumoto is one of the best when it comes to self-promotion. Takagi then left because it’s Christmas Eve and he has a family to be with. Saya told Matsumoto that her retirement match will consist of 38 one minute bouts. She asked if Matsumoto could be one of her 38 opponents. Matsumoto wasn’t sure if she could make it but quickly accepted when it looked like Saya was going to leave. 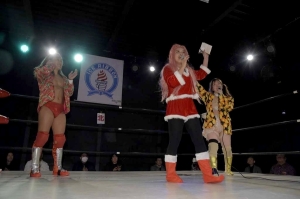 The show ended with Meari Naito singing “All I Wants For Christmas Is You” while everyone danced around her. Then Matsumoto had one last message to tell everyone. Gake no Fuchi is back but she cannot do this on her own. She is looking for trainees or other newcomers to help her make this place bigger and bigger. The next time this show happens will be on 4th January when Matsumoto takes on Chris Brookes!

This entry was posted on Tuesday, December 24th, 2019 at 9:29 pm and is filed under Results. You can follow any responses to this entry through the RSS 2.0 feed. Both comments and pings are currently closed.