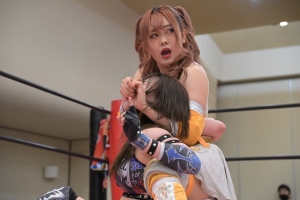 Today was the first time in three weeks Tokyo Joshi Pro held a show in front of an audience. Miyu Yamashita said in that period without fans she was able to get stronger and win the Princess Of Princess Title. Then Maki Itoh stepped in and said it was thanks to her because those two can achieve anything together. Itoh asked if Yamashita wants another championship because she wants them to challenge NEO Biishiki-gun for the Princess Tag Team Titles! Yamashita was surprised by the idea but looks forward to it. 121000000 will get their title shot in Korakuen Hall on 17th April. Backstage Itoh said she ultimately wants 121000000 to have all the championships in TJPW so they will have two belts each.

Ever since her debut at 14 years old, Marika Kobashi has never challenged for a singles championship. She never had the confidence to believe she could do it. So it annoys her to see Hikari Noa, who debuted after her, become the International Princess Champion looking cool and confident. Kobashi turns 20 years old in a few days and she wants a title shot as a sign that she has grown up. Noa accepted the challenge and the match will happen on 17th April. Both have promised not to lose. Backstage Kobashi mentioned that if it wasn’t for the pandemic, she was supposed to attend an American university for half a year starting this month. She can’t do that now so she will chase after the IP Title instead.

This entry was posted on Saturday, May 15th, 2021 at 10:17 am and is filed under Results. You can follow any responses to this entry through the RSS 2.0 feed. Both comments and pings are currently closed.