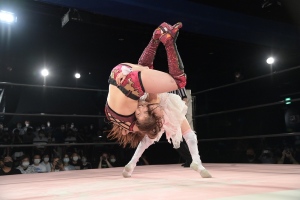 The Tokyo Princess Cup Three-peat is still on for Mizuki after she eliminates the biggest threat in the tournament. Miyu Yamashita is out in the Quarter Finals! A big moment came when Yamashita attempted to do an Avalanche Attitude Adjustment but Mizuki left her hanging upside down and hit a Diving Foot Stomp through her. Another big Diving Foot Stomp to the outside put Yamashita in danger but she used her kicks to get out of a defensive state. Mizuki prevented the Crash Rabbit Heat from happening by clinging onto Yamashita’s leg before she could run. Yamashita pulled off a normal Attitude Adjustment but Mizuki kicked out at two. She then dodged the Skull Kick, used a Jackknife Pin for a nearfall and immediately hit a Double Stomp out of it. Mizuki hit the Cutie Special but couldn’t pull off a bridge for the pin. She had to do one more Diving Foot Stomp before doing another Cutie Special to win the match. 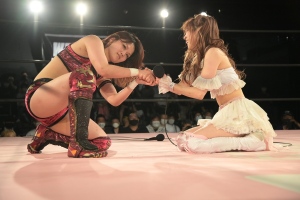 Mizuki pulled Yamashita into the centre of the ring so she wouldn’t leave at the end of the show. Mizuki told the fans she defeated a monster today. She used to be jealous of Yamashita for having abilities that she does not have. But then Mizuki figured out that she has abilities that Yamashita doesn’t have too. Mizuki thanked Yamashita for the match and promised to win the Princess Cup for her. She also gave a shoutout to Yuka Sakazaki who has returned from her American excursion but is currently at home in quarantine. Together Mizuki and Yamashita ended the show by shouting “Happy Happy!” Backstage Yamashita said that Mizuki is also a monster in the ring just like her. She is frustrated to get eliminated from the tournament yet again but she will continue to enter the Princess Cup for as long as she is in Tokyo Joshi Pro. She is already looking forward to the 9th one. 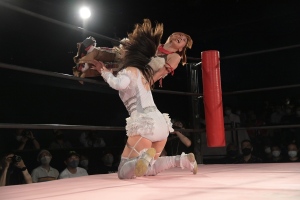 There are two things you can count on in the Princess Cup. Yamashita eventually loses and Shoko Nakajima always does great. For the 6th time in 8 tournaments Nakajima reaches the Semi Finals! She defeated Rika Tatsumi by breaking out of the White Dragon Sleeper and hitting the Northern Lights Suplex. She then followed up with a Double Arm DDT and got the three count with the Diving Senton. Nakajima knew that Tatsumi was fighting for something so she counted on one opportunity opening itself up for her to win today. Tatsumi said Nakajima is too big of a kaiju for her to beat. She may look small but she is bigger than Mt. Fuji, the Tokyo Tower and the Sky Tree. She is the size of Mount Everest! 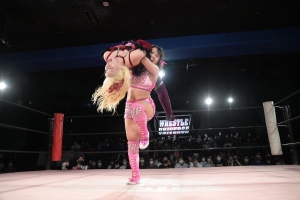 Only one fresh face made it to the Semi Finals this year and it is Miu Watanabe. She showed Yuki Aino just how powerful she is with a very Giant Swing. Later she powered out of the UBV and knocked her down with a big Shoulder Block. A Laserbeam punch was used to set up the Tear Drop and Watanabe punched her ticket to the final four. Watanabe said her matches with Aino are always important and pointed to their Princess Tag Team Titles match last November as an example. She promised to do her best with the Giant Swing as she approaches the final rounds.

Maki Itoh reaches the Semi Final for the second year in a row. She had to go through a scrap to get there though. Suzume ambushed Itoh with a Dropkick from behind during her entrance and they fought around ringside. Back in the ring, Suzume caught Itoh’s Diving Headbutt with the Ring A Bell. Suzume went for her finisher again later but Itoh blocked it and put her in the Itoh Punish for the submission win. Itoh pointed to the scratch under her left eye with one hand while sticking up her middle finger on the other to celebrate her win. You’d think Itoh would be furious at Suzume for damaging the cutest face in the world but that’s not the case. Instead Itoh thinks it is amazing because she doesn’t feel any pain from it at all! It shows she is getting better and she will continue to get better every day.

There was a disappointed response to this year’s Olympic Games opening ceremony. So Hyper Misao, Nodoka Tenma and Haruna Neko held their own as part of their 3 Way Match. Perfume wasn’t in this one either so the girls had to perform in their place.

At the start of the show it was announced that Yuki Arai will have her first main event match on 7th August. The show is happening in Nagoya, the home of SKE48. Arai will team with Yamashita against Yuki Aino & Moka Miyamoto. SKE48 member Shiori Aoki will be in attendance too.

This entry was posted on Saturday, July 31st, 2021 at 7:37 am and is filed under Results. You can follow any responses to this entry through the RSS 2.0 feed. Both comments and pings are currently closed.